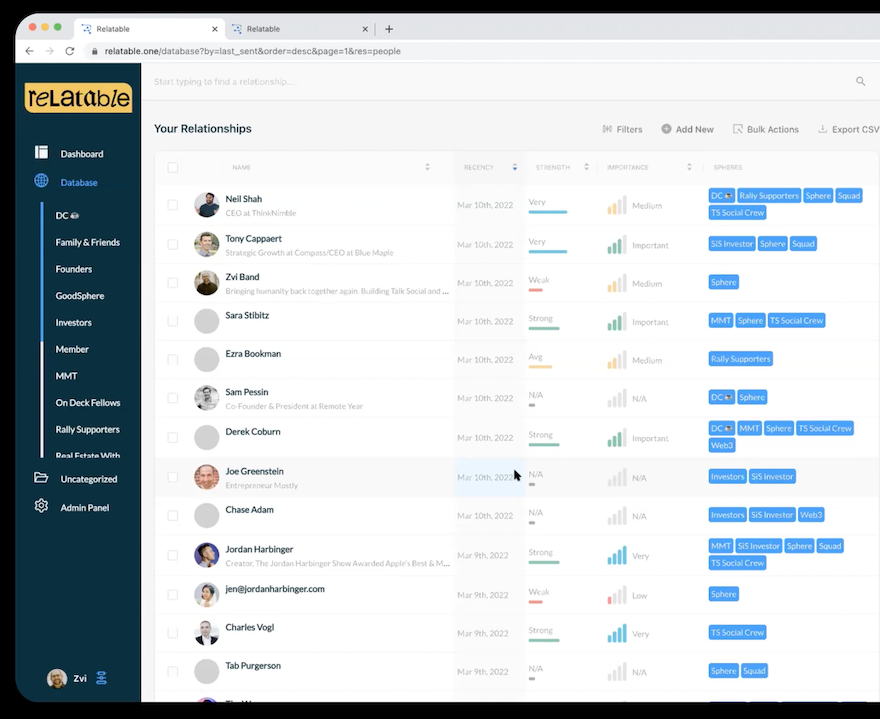 At nat.app, we're always curious to see new personal CRMs come to live. In recent years, this hasn't been the case that much, it seems like the personal CRM trend has somewhat died down.

Thus, when we saw that a new personal CRM had launched, we got very excited! Enters Relatable. This is not any indie hacker bootstrapped weekend project, instead, it is developed by Zvi Band, the guy who initially launched Contactually.

If you don't know it, Contactually was a personal CRM built many years ago, in a time when the idea of a personal CRM was still very new and people were trying to figure out what such a tool could do for them.

Zvi's take was interesting: Contactually was more like a relationship assistant. It would help you remember to keep in touch with your network by sending you reminders to follow up, and also give you "buckets" in which to group your contacts.

The idea was great, and Contactually quickly became one of the most popular personal CRMs on the market. However, the company was eventually acquired by a larger organization and Contactually lost its way, becoming just another CRM, this time focused on the real estate market.

When we were doing customer interviews, a lot of our early users told us how much they had loved Contactually and asked us to build the exact same features. So we had high hopes for this new market entrant!

(Contactually was eventually shut down in early 2022).

Zvi is back with a new take on personal CRMs with Relatable. He also wrote a book on relationship building, so this is one of the best person on earth to build such an app! 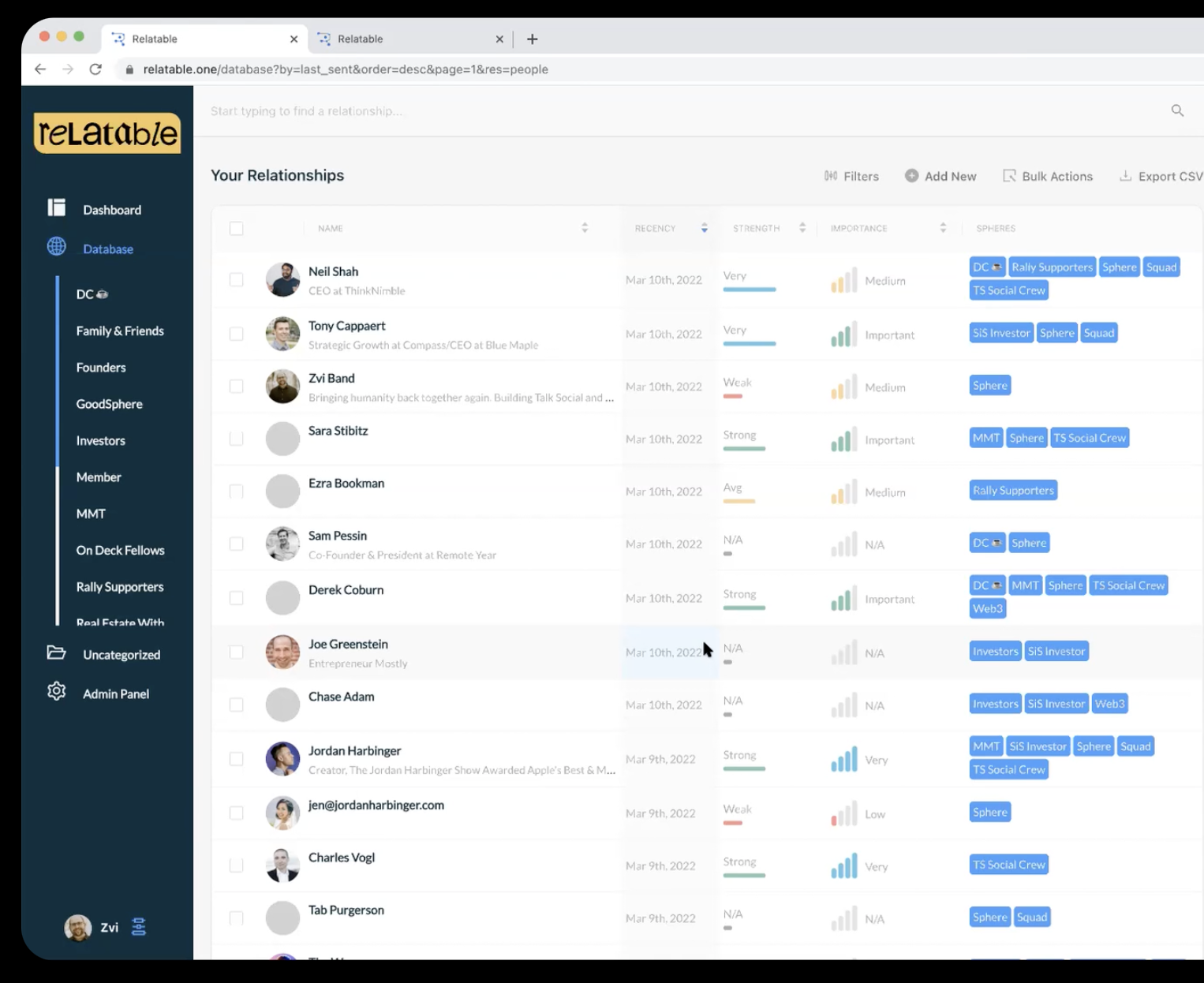 Screenshot of the main dashboard

Relatable follows a lot of the best practices in terms of Personal CRM according to our standards: Email integration, shows you contacts based on the strength of the connection, ...

On top of those, Relatable adds a few interesting features:

For every contact, you can specify how important those are to you. This is an interesting feature as you might indeed be losing touch with people that you don't care about as much as others, and you might want to be shown the most important people first.

On a side-note, the reason we haven't implemented such a feature in our own product is because we consider the additional effort required to label every contact as too tedious, plus it feels awkward to label people as non-important (why do you even have them in your contact list then?).

Contacts have to be part of a Group

Relatable shows you a list of contacts you've recently interacted with in order to let you choose which ones you want to add to your contact book. 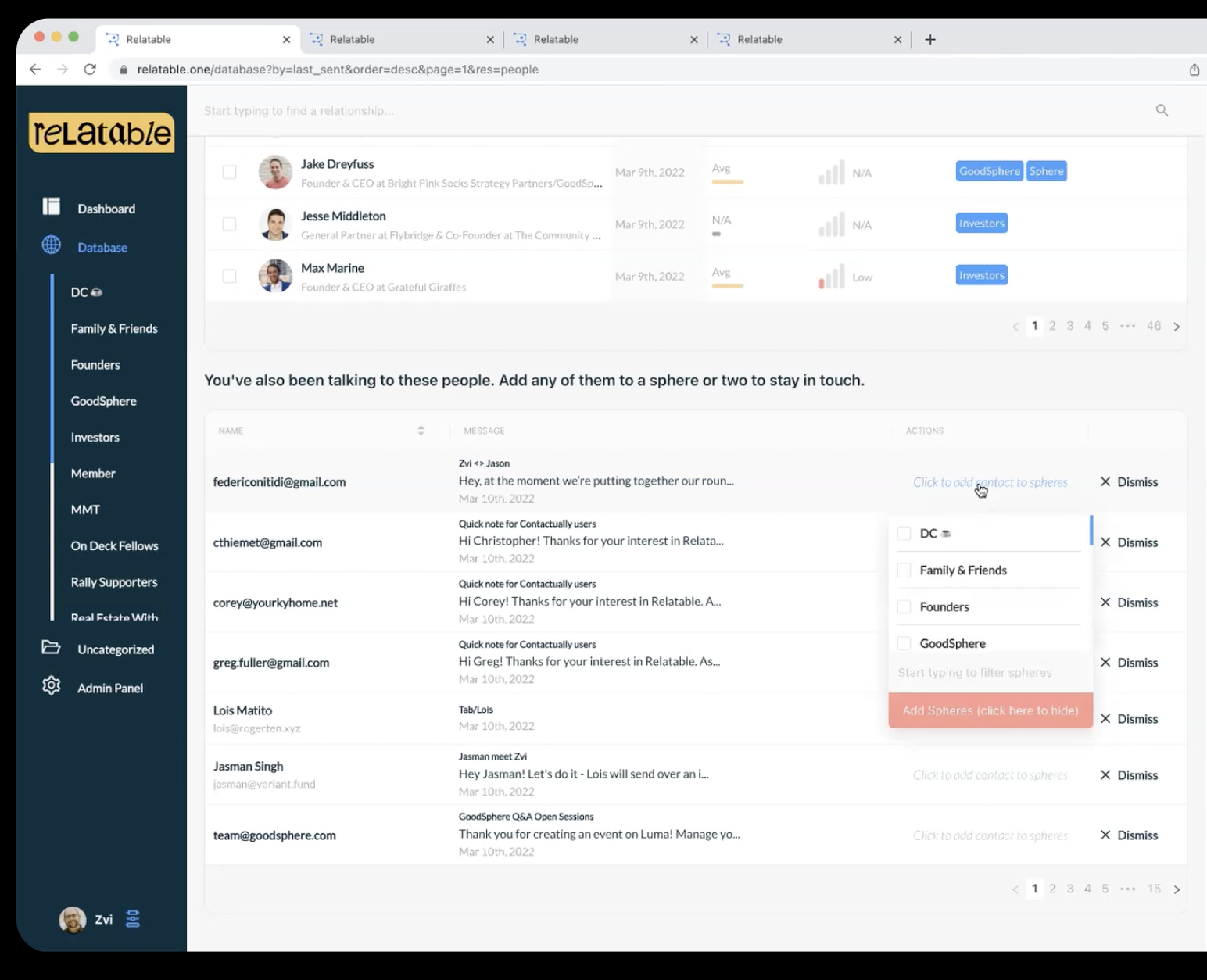 As one can see on the screenshot above, Relatable is an opinionated software product in the sense that it forces you to create buckets of people and add new contacts into one of those. This group feature is really liked and often asked for by people interested in personal relationship management apps, so this makes tons of sense.

We never implemented this because of the additional complexity, plus the fact that we never understood the value of filtering contacts by groups.

What's not so great

Finally, let's discuss about the downsides of the product

Relatable's pricing is on the high end, at $39/month. This is also the amount we charge for our most premium plan and we totally agree that this is a reasonable price given how small and exclusive the personal CRM market is. Still, it might be out of budget for some.

This is really the big problem in my view. Relatable is very buggy and clunky. The interface is hard to use, buttons don't give you feedback to let you know that something works or not. While I was testing the app, many errors happened. I couldn't unsubscribe for example or disconnect my email account.

Those things will probably get fixed in the future, but it's still a bummer as it erodes the confidence of customers.

I'm super happy to see a new player enter the space and look forward to seeing it grow! It's always interesting to see different takes on the same problem!

Curious about what we're building?